In the News
Press Releases
Blog

A Tale of Two Chemistries: Technologies & Strategies That Will Enable Cell Manufacturers To Win In Both NCx & non-NCx Markets 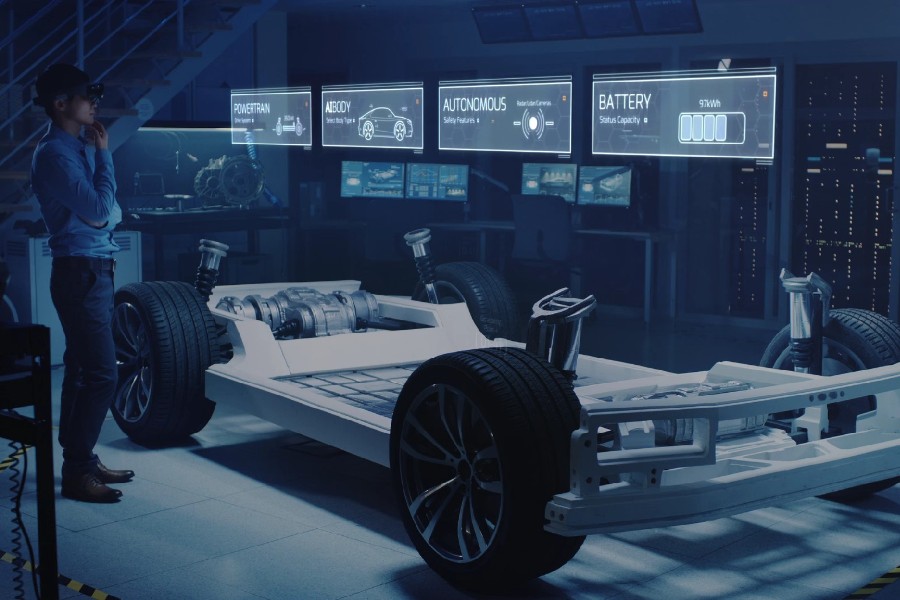 Tesla, VW, and Stellantis all held a battery, power, and EV day, respectively, in 2020 and 2021. While this is nothing new for Tesla, VW and Stellantis outlined plans to achieve ambitious electrification goals which include non-NCx chemistries. The most significant common themes among the three: a unified BEV platform and a multi-chemistry approach. This design is intended to drive down costs and produce profitable, low-cost, high-volume, and ESG compliant BEVS. This is significant because these three OEMs may produce four out of every ten BEVs in the world by 2024: 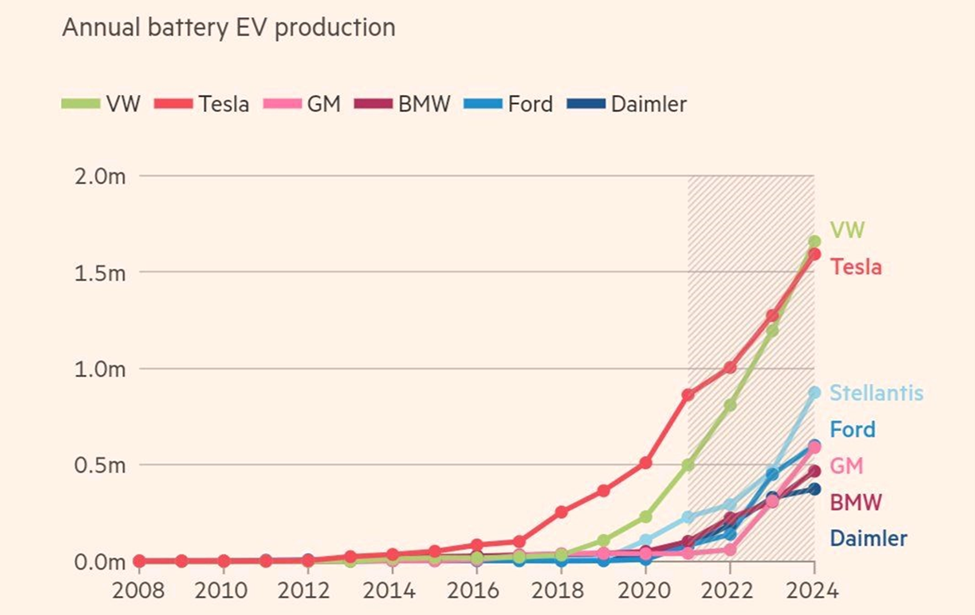 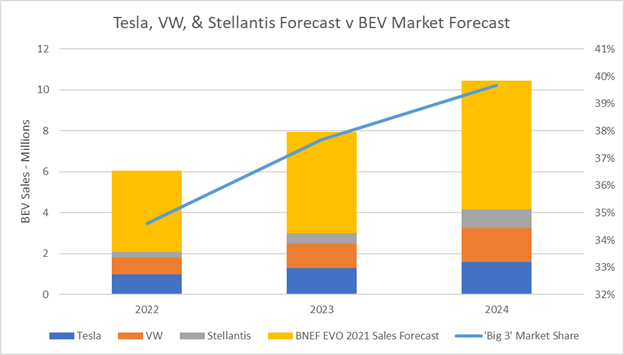 While this strategy may be good for the OEMs who will implement it, it may also be punitive for their battery suppliers. Most large cell suppliers have exclusively or heavily favored a specific chemistry. The EU and USA have almost exclusively been NCx markets for EVs dominated by Panasonic, LG Chem, AESC, and Samsung. Multi-chemistry platforms that include non-NCx will force these companies and others to expand their offerings to their customers’ needs or lose out on the growth potential of mass market BEVs. 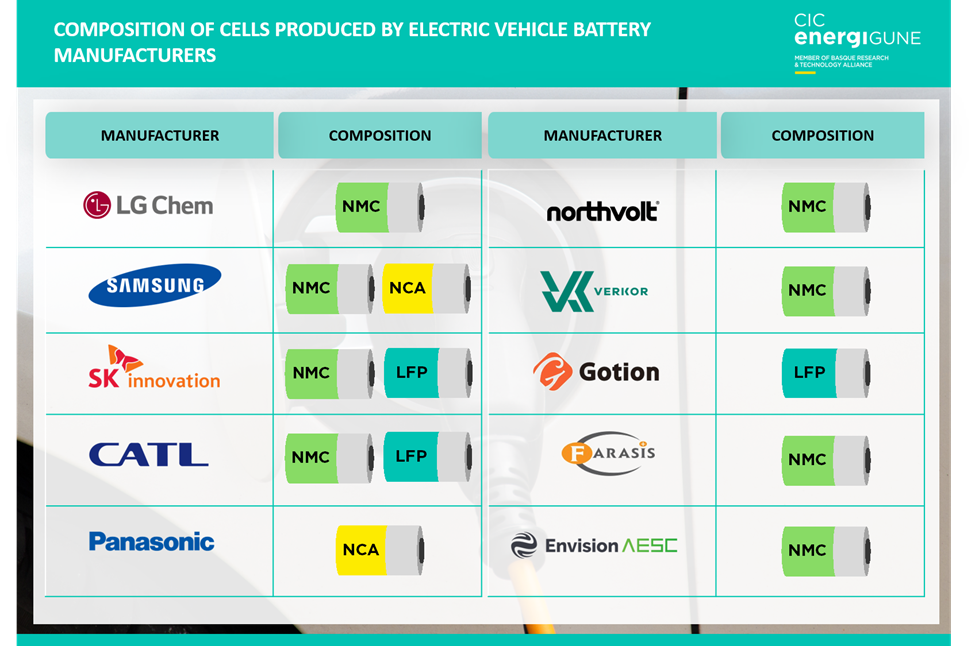 We will examiWe will examine the market impact of multi-chemistry platforms as well as the strategies and technologies that can give cell manufacturers the edge to maintain market share and growth prospects with multi-chemistry customers. Sodium-ion batteries fit the general definition of non-NCx however no official announcement has been made by any major OEM to use them in BEVs. While this potentially low cost chemistry holds promise we will omit it from this analysis.

Tesla, VW, and Stellantis all revealed their cathode chemistry by segment at their respective battery/power/EV days in 2020 and 2021: 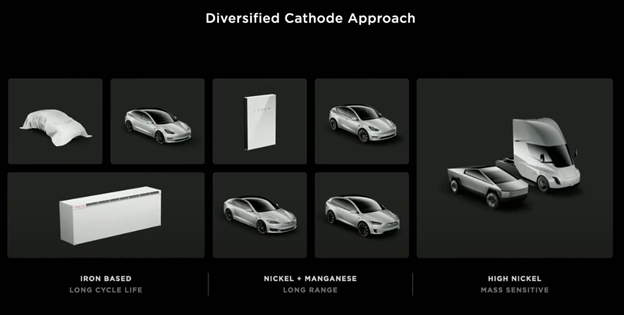 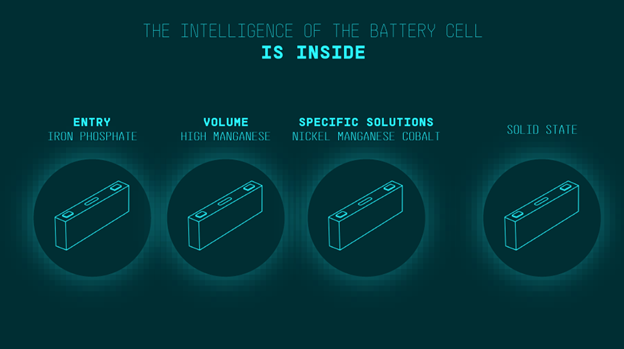 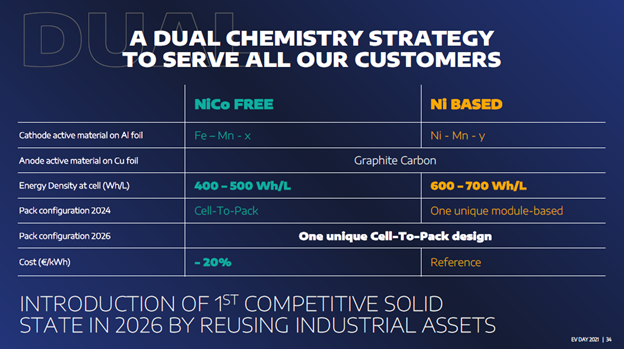 Based on historic ICE sales segmentation [2] and early growth indicators of lower-cost BEVs, we are assuming that 84% of BEV sales will have non-NCx cells resulting in 79% of deployed capacity by GWh [3] by 2030. This assumption is validated by VWs own projection of 80% by 2030 and starting in 2023: 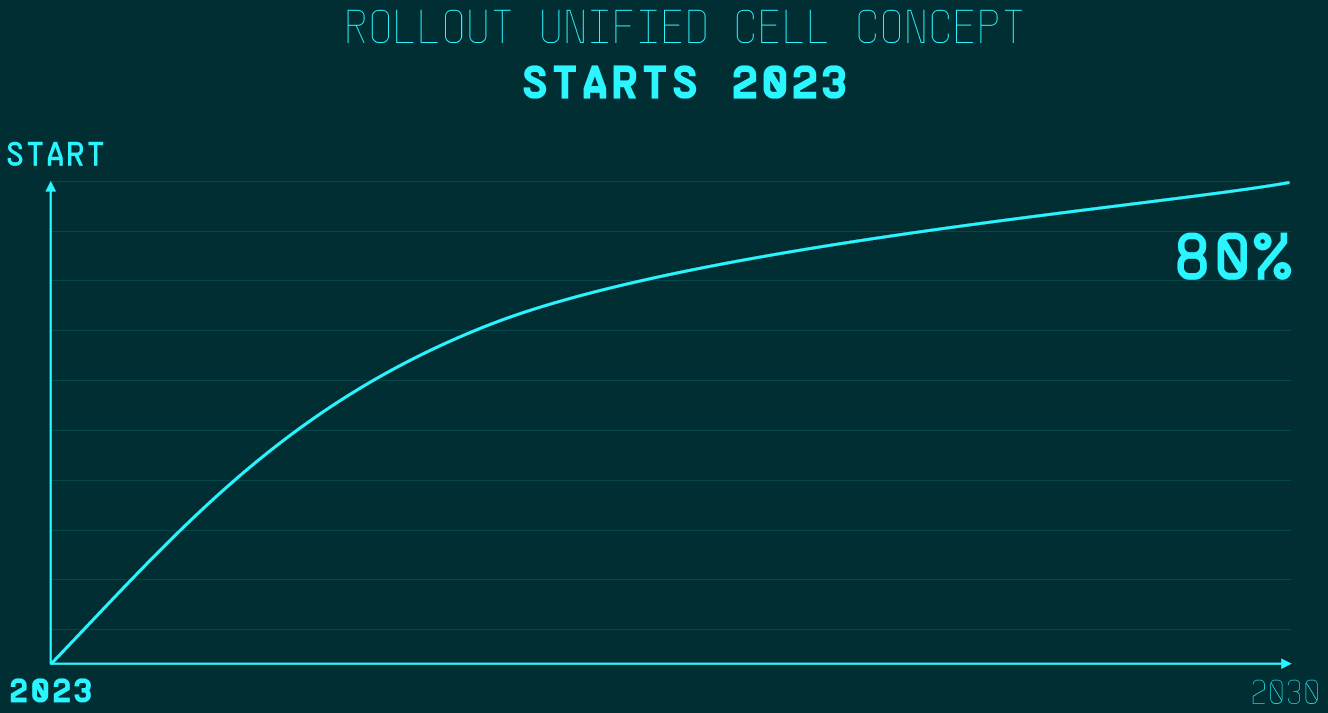 In order to become a multi-chemistry manufacturer there are organic and non-organic options. LG Chem, a leader in the NCM market, formally announced they will be developing LFP for EV in January 2022. This organic option works well for them as they have abundant resources and a head start on R&D based on their statements. However, bringing a new chemistry to market from scratch can take up to five years which, if started today, would be 2027 and years behind the launch of multi-chemistry platforms.

Non-organic options like acquisition and licensing have shorter go-to-market paths. However, licensing technology for a specific cathode chemistry may not be a practical option for a number of reasons, primarily because a cell manufacturer is not going to hand over trade secrets to a future competitor. Acquisition of small to medium sized non-NCx manufacturers is far more likely. The advantages here are an existing product, a manufacturing footprint, and employees who are knowledgeable on both fundamentals and production. Reliance New Energy’s acquisition of Lithium Werks is an example of this strategy. The following is a list of potential targets:

While acquisition and/or development of new chemistries is the first step in adapting to multi-chemistry platforms it will not be enough by itself. Cell manufacturers will still need to produce market leading products to compete in each chemistry market. For this we evaluated performance enhancement and/or cost savings, licensable technologies that are at a TRL 6 or higher. This generally indicates a technology that can be ready by when the major EV OEMs launch multi-chemistry unified platforms. We focused on manufacturing technologies and processes rather than materials. It is important that manufacturing technology partners be cathode agnostic, QuantumScape does a great job explaining why here. This segment is very chemistry agnostic and likely to appeal to a cell manufacturer building a more adaptable business model.

Batteries made with Neocarbonix at the Core have higher active material loading, higher C-rate capability, lower resistance, and long cycle life, all at lower cost per kWh.

24M — Cambridge-based 24M has a licensable manufacturing platform. Invented in the MIT lab of Dr. Yet-Ming Chiang, SemiSolid electrodes use no binder, mixing electrolyte with active materials to form a clay-like slurry. The unique slurry allows the creation of ‘thick electrodes’ with less volume, mass and cost while enabling a simpler manufacturing process. 24M developed a cathode agnostic technology envisioning NMC for mobility and LFP for stationary but will benefit from LFPs growing presence in mobility.

Three OEMs with multi-chemistry platforms may change as much as 32% of EV deployed capacity from what was anticipated to be NCx to non-NCx. In 2030 this would account for 609 of 1,903 GWh [7] of forecasted annual production. Forecasted capacity will only grow if more OEMs adopt a similar strategy. Hyundai, the third largest automaker in the world with a goal of selling one million BEVs in 2025, has been rumored to contract LFP cells from CATL for its BEV platform. Volkswagen also recently announced a partnership with Ford to use VW’s MEB platform. With billions of dollars of battery sales at stake many large cell manufacturers will have to both expand their product lineup and be market leaders in cost or product performance. Partnering with a de-risked manufacturing technology company can provide the competitive advantage necessary to maintain and grow market share in a rapidly evolving landscape. 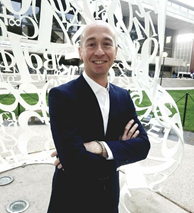 Article is contributed by Charlie Parker. Charlie Parker is founder and principal consultant of Ratel Consulting, a market intelligence and  strategy consulting firm in Cambridge, Massachusetts. He leads the energy storage practice, which focuses on the battery value chain and lifecycle and advises startups, corporations, financial institutions, and non-profits. He is a founding member of the Green Finance Institute’s Coalition for the Decarbonisation of Road Transport.

Your experience on this site will be improved by allowing cookies.